Johnny Appleseed in a Rich Land 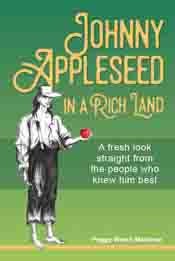 Peggy Welch Mershon has lived in the Mansfield, Ohio, area since 1974 and started as a reporter and editor for the News Journal in 1978. She also wrote weekly columns for this newspaper on genealogy, antiques and history. She was the editor of the weekly Bellville, Ohio, Star for several years. She has been a member of the Ohio Genealogical Society, the Richland County Genealogical Society, the Bellville-Jefferson Historical Society, the Greentown Preservation Association and the Butler-Clear Fork Valley Historical Society. She also served as curator of the Butler historical museum and was instrumental in acquiring its Rosella Rice collections.

She was chosen by the family and friends of the late Dwight Wesley Garber of Richland County to correct and complete an unpublished history of Johnny Appleseed, for which he collected information and submitted manuscripts from 1948 through the early 1970s.