THE MISADVENTURES OF MARJORY

4th in our Tribute Series to James Ball Naylor 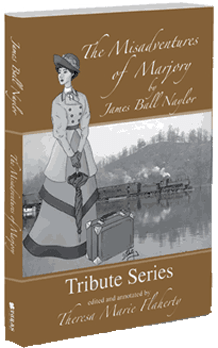 Originally published in 1908, The Misadventures of Marjory is Naylor’s eighth and final novel. Marjory Dawes, the main character, is the age of his oldest daughter when he wrote it. She is a delightfully controversial and headstrong young woman. Much too pretty for her own good, Marjory brings out the protective instinct in men. While away at secretarial school she discovers that her older brother plans to marry. Annoyed that someone else has usurped her long-held spot in his affections, she rushes home to stop the wedding. When she cannot, she runs off to Columbus to start a new life. One misadventure after another ensues as she meets some very interesting characters and finds romance along the way.