2nd in our Tribute Series to James Ball Naylor 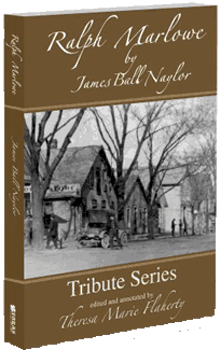 Ralph Marlowe is laid in the hill country of southeastern Ohio. The plot is romantic, complicated and intensely interesting; and best of all, out of the ordinary. The characters are drawn from life; and so well drawn that on finishing the book, one looks upon them as actualities–acquaintances. The author’s style is vigorous, crisp and clear; no pictures of persons or places are needed to help out the reader’s imagination. Ralph Marlowe is like–and yet totally unlike–David Harum, Eben Holden, and other books of that class. Most books of that kind depend upon the eccentricities and individuality of one character to make them popular. Dr. Naylor has been prodigal in this respect. No less than five or six eccentrics, all distinct, all worthy of consideration, figure on the pages of his novel; Dr. Barwood, a raw-edged, gruff old village physician–an honest, honorable, lovable old chap; Jep Tucker, a loquacious and incorrigible yarn spinner; Tom Nutt, a stuttering oddity; Lon Crider, a volatile drummer and his ever-present buttonhole bouquet; Sam Clark, the telegrapher. The story should be dramatized; it would be irresistible.

James Ball Naylor’s 1901 Best Seller Ralph Marlowe brought him world-wide acclaim and established him as one of the top authors. He stated that Ralph Marlowe was partially autobiographical and a story of actual experience. He did not twist or distort history to fit his tale, but has taken real people and told the story of their hopes and fears, their loves and sorrows, in a simple, convincing style that wins from the opening chapter. Naylor has given literary immortality to all of his characters; for there is no doubt that he has drawn them from real life. Naylor’s ability to tell a story with word pictures brought his poems and books to life for the reader. Ralph Marlowe is a true slice of western American life at the turn of the twentieth century, singularly free of exaggeration. Early reviews characterized Ralph Marlowe as not our ordinary novel of the period and stood Head and Shoulders above the rest. It remained on the Bookman’s Best Seller List for six months and could be found in bookstores across the United States and Europe. It remains a great read!!

Ralph Marlowe is the legitimate child of actual experience. Much of the story–the places, characters, and incidents–I have known; a part of it I have lived. The plot is founded on fact; many of the incidents are actualities; the characters are living, breathing entities. The village of Babylon was and is as represented. For its inhabitants I offer no apology; they are as heredity and environment have made them. This is no purpose novel. I have recorded what I have seen and known–that is all. And things are as they are; not as one would have them. With this brief explanation, I hand over the story to the reading public. If that final critic be pleased with it, my labor–a labor of love–will have been worth the while. J.B.N – Malta, Ohio January 4, 1901