lst in our Tribute Series to James Ball Naylor 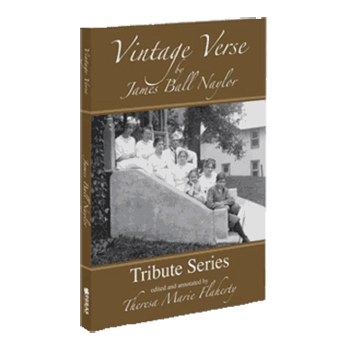 Vintage Verse is a one of a kind collection of verse put together by Naylor’s daughter, Lucile Naylor. Many are as apropos today as when they were written. It is a tribute volume to her father of poems she copied from old family scrapbooks in an effort to preserve some of those poems not included in any of his other published volumes. Theresa Marie Flaherty, editor of this volume, has added a special selection of some of Naylor’s poems that are appropriate and add to this tribute series.

Naylor’s poetry was written for common folks and this volume touches on the beauty of nature, portrays family life, pays tribute to the flag and to veterans of our wars, addresses political issues, and displays his fine sense of humor. The poems in Vintage Verse linger and take you on a journey down memory lane—there is a little something for every reader.

James Ball Naylor was best known for writing novels, such as his best-seller, Ralph Marlowe, in 1901. Poetry, however, was his first love. He had a natural ability to paint word pictures that brought his poems to life for the reader. Naylor’s previous volumes of collected verse, Current Coins Picked Up at a Country Railway Station, Golden Rod and Thistle Down, Old Home Week, Songs From the Heart of Things, Book of Buckeye Verse, and Vagrant Verse were fine, thoughtful selections of poems that live forever in minds and hearts. The poems touch on everyday life, the beauty in nature, patriotism, political issues and humor. They are rare and treasured collections of James Ball Naylor’s brush strokes with his pen.

I, the second child of James Ball Naylor, am making the effort to preserve all those poems of Father’s not included in any of his published volumes of verse.  Thus copied, by me, longhand, from old and deteriorating scrapbooks of mine, I trust that you, dear reader, will be lenient in your critical view of these copies of them. All but one of them have been published in newspapers–local, state, and national, or in magazines. They date all the way from the late 1880s to 1945—the year of his death. The name S.Q. Lapius was Father’s nom de plume–or pseudonym—and was used only in the very early days of his writing, thus dating some of the poems herein recorded. Father used to say that poetry must have “rhyme, rhythm, and sense,” but one will note that he added a bit of nonsense now and then.